Latin-Americans, Caribbeans and Americans analyze the migration question at the regional level

La Jolla (Californie), June 27th, 2007 [AlterPresse] --- About fifteen Latin-American, Caribbean and American professionals and experts focus this week on the migration problems in the area, during a seminar organized in La Jolla, California (Pacific Coast of the United States).

This workshop, organized by the Institute of the Americas between 24th and 29th June 2007, is held on the topic "public Policies and migration", notes the online agency AlterPresse.

The lecture is directed by the diplomat Jeffrey Davidow, president of the institute, former American ambassador in Mexico and under-secretary of State for the Western hemisphere. 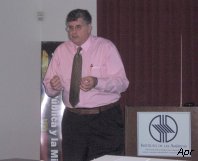 "Migration is a principal question in the current world", declares the ambassador Davidow during a session of the workshop. It is a "fact of everyday life", which takes place everywhere throughout planet, he declares.

The seminar approaches the challenges of migration in the Western hemisphere, citizenship, border control and national identity, the economy of migration, the national interests and co-operation regarding migration.

Football : the Haitian National Selection of U-17 is complete again after a Spectacular Desertion

Towards the organization, in June 2007, of a third summit on the development of Haiti by tourism

Haiti is taking « a new significant step in the struggle against armed gangs », according to the UN