Haiti : What are the challenges that Préval must face? 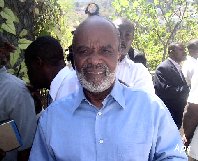 Translated from French by Charles Arthurwww.haitisupport.gn.apc.org

A week after the proclamation of his victory in the 7 February elections, René Préval is taking stock of the expectations awaiting him in the context of a current situation marked by a problematic political transition and recurring social and economic problems.

At his first press conference on 22 February, the new head of state admitted, "I am frightened to see the passions aroused by the presidential campaign, the election of a president, and the hopes that the population have in this president."

Préval is trying to break with the tradition of an Executive making fabulous promises, knowing without doubt that he will be judged on his results in a context that bares no comparison with his first stint as President between 1996 and 2001.

"The only promise that I have made to the people is that I will work with all my strength for the good of the country and will make sure that there is no corruption in the public administration or the State."

The president-elect proposed two essential missions for himself: the establishment of the institutions provided for in the Constitution to create stability in the country, and the creation of the conditions necessary for private investment in order to create jobs. "I believe there is a general consensus around these objectives," he said.

However it is certain that popular expectations go a lot further than the objectives announced by Préval. A number of organisations from the popular sector have already made it clear they want to go beyond a simple respect for the popular will as reflected in the elections.

Taking encouragement from the mobilisation that followed the 7 February elections, the Mouvement Démocratique Populaire (MODEP), the Tèt Kole peasant organisation, and the youth group Solidarite Ant Jèn (SAJ), suggest that the "popular masses are searching for a real alternative."

"Let’s not forget our demands," state these organisations, insisting that "the same errors committed in 1990 cannot be repeated" (a reference to former president Jean-Bertrand Aristide’s popular mandate.)

The demands put by MODEP, Tèt Kole and SAJ include opposition to the "foreign occupation", which holds the country under the yoke of the great powers.

By "foreign occupation", these organisations mean the presence of the UN mission (Minustah) composed of more than 8,000 troops and police from 40 countries.

The popular sector also intends to put pressure on the new administration to detach itself from the Interim Cooperation Framework (Cadre de Coopération Intérimaire, CCI), which the interim government agreed with funders in 2004.

The organisations from the popular sector are still critical of the fact that the people’s aspirations were not taken into account by this agreement, which applies until December 2006 and which is based on neo-liberal objectives.

For example, these organisations want the government to act directly to lower the prices of essential commodities. They also want a "genuine agrarian reform" in which the land is controlled by "those who work it."

The agrarian reform carried out by Préval during his first presidency is often described as a "parody of an agrarian reform". Land was given over to peasants in the Artibonite, who called in vain for a proper structure to the process.

Major reforms of the health service and of the police and judiciary are expected. "All these questions must be addressed by the government acting in an autonomous manner", suggest MODEP, Tèt Kole and SAJ.

But based on the experience of his first presidency, Préval wants to convey the message that being President doesn’t mean he can open all the doors, and that actions to be undertaken must be realistic.

The President has "limited power" and his room for manoeuvre is "reduced" without collaboration with a strong Parliament, stated Préval.

"If there is not a strong Parliament where cohesion reigns, the President cannot respond to the passions and the hopes that the people have in him", predicted Préval.

Will the new head of state be able to decide on the minimum objectives in agreement with the Haitian nation, including the popular movement, and taking into account the desires of the majority population?