Haiti-RD : Statelessness is imposed on Dominicans of Haitian descent 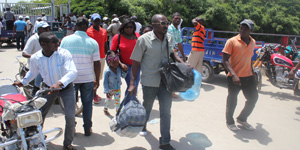 Reposted by AlterPresse from Latinamerica Press [1]

Identified mainly by their physical features, Haitian migrants in the Dominican Republic, which shares with Haiti (Ayití in Haitian Creole) the Hispaniola Island, suffer the constant threat of being deported despite having been born in that country, having the Dominican nationality, or having worked for many years in the country and contributed to its economic growth.

There are now more than 130,000 people whose temporary residence permits expired in June 2015, therefore, they live with a sword of Damocles dangling over their heads after an unprecedented wave of deportations and “voluntary returns” of Haitians who flee a land hostile to them.

Under the National Plan for the Regularization of Foreigners (PNRE), approved in June 2014, the Dominican government agreed to a moratorium on expulsions to temporarily stop the forced return of Haitian immigrants.

Between June 2015 and July 2016, some 125,720 people crossed the Haitian-Dominican border in subhuman conditions, according to the Support Group for Refugees and Returnees (GARR), a Haitian platform that has worked on migration issues since 1991.

It is estimated that 77,405 is the number of “voluntary returnees” and 48,315 are those “deported,” including Dominicans of Haitian origin that arrived without any means to Haiti, a country that has not yet been able to establish appropriate infrastructure in receiving areas.

The current situation, which had its beginning three years ago, is one of the most serious migratory crises ever between Haiti and the Dominican Republic. This led the two countries to establish “round table” talks following resolution 168-13 of the Dominican Constitutional Court in September 2013, which revoked the citizenship to thousands of Dominicans of Haitian descent. The round table talks were interrupted in 2015.

This is the most extreme point the Dominican state has reached, to strip overnight their own Dominican citizens of their citizenship by the mere fact of being children of Haitian parents. The resolution touches all those who were born in Dominican territory to foreign parents in irregular immigration situation since 1929.

According to a 2012 survey by the National Statistics Office of the Dominican Republic, there were 524,632 migrants in the country, of which 458,233 were of Haitian descent. If that ratio holds up, Haitian migration now represents 87.3 percent of the foreign population living in the Dominican Republic.

This important Haitian presence is the result of a history that dates back to the 1920s, after the US military occupation of Haiti in 1915, in a context where most countries in the region, including the Dominican Republic, were under the military domination of the United States.

Historians have established how, at that time, Haitian peasants, deprived of their land for the benefit of new US companies, impoverished and tired of the fierce conditions caused by the occupation, started to massively leave for the Dominican Republic or Cuba. There, paradoxically, is where the US sugar companies also bought their labor for miserable wages.

“The emigration took significant and tragic proportions,” notes Haitian historian Suzy Castor, and the workers were virtually enslaved in the sugar cane fields called bateyes. Castor indicates that United Fruit, for example, employed 8,000 of these emigrants in 1926 and 12,000 in 1927.

The dictatorship of François and Jean-Claude Duvalier (1957-1986) also drove many Haitians to emigrate, and even through contracts, the Haitian State undertook to regularly supply sugar companies with many cane cutters in the Dominican Republic, whose economy was originally built on what has been called the “bitter sugar.”

Those who have been stripped of their citizenship are, in part, the descendants of those Haitians who for generations have never known anything about Haiti, have no contact with the homeland of their ancestors and have struggled to progressively integrate into Dominican society.

Hence that resolution 168-13 has provoked such strong reactions of rejection and even protests in the streets of Haiti.

In public opinion, expressed through the media, one of the highlighted elements to try to understand this situation is the economic factor. In June 2015, during the migration crisis, the then Haitian Prime Minister Paul Evans, estimated in an interview with the press that “the best way to solve the problem is to work for a balance in the living conditions between the two countries.”

But for thousands of Haitians the root of the problem is the “anti-Haitian” sentiment that prevails across the border. This led them to hold demonstrations against “xenophobia” and Dominican “racism” in the streets of the capital and in front of the embassy of the Dominican Republic in Haiti in 2015.

The December 4 Group — made up by influential personalities of Haitian society — and other organizations of civil society, called for a demonstration on Feb. 25, 2015 in the streets of Port-au-Prince, which gathered huge crowds, to protest against the “discriminatory,” “racist” and “anti-Haitian” practices of the Dominican Republic. On July 21 of that year thousands of Haitians participated in the “march for dignity” and in early August another protest was held in the border with the Dominican Republic to protest the immigration policy of the neighboring country, which with the “mass deportation” leaves Dominicans of Haitian descent in a state of statelessness.

Several Haitian human rights organizations denounced that resolution 168-13 of the Dominican Constitutional Court constitutes a “civilian genocide,” almost 75 years after the slaughter of Haitians, which happened in October 1937 in the Dominican Republic. Then Dominican dictator Rafael Leónidas Trujillo (1930-1961) ordered the massive eradication of the Haitian population that lived in the bateyes along the border between the two countries. Around 15,000 migrants Haitians were persecuted and killed then.

The Dominican Republic is not a welcoming land for Haitians who have continually migrated for many years because of, among others, the economic gap that widens relentlessly between the two countries.

The Haitian-Dominican border is not just a land border. Despite having a common history of European colonization and US domination, a socio-cultural frontier divides the island. On the one hand is the Dominican Republic, which values its indigenous past and the Hispanic element of its history, and on the other, is Haiti, whose African descent is looked down on and rejected by its neighboring country.

For some analysts, this vision is the pillar of all Dominican immigration provisions, despite the existence of friendly relations between people and families from the two countries.

In fact, the way governments in Haiti have addressed the immigration issue does not help to reverse the trend. The attitude of Haitian authorities is usually condemned because it is perceived as favorable to defending private interests and not the common interest and dignity of Haitian migrants.

The various presidents of Haiti have governed for the mulatto elite who control the major businesses and banks in Haiti, and do not show solidarity with Haitian migrants in the Dominican Republic or with the black majority living in poverty and exclusion.

Despite being proud of their history of freedom and black culture, the exclusion to which most Haitians are subjected to, results in many of them having to accept living in inhuman conditions, in marginalization and discrimination in the Dominican Republic.