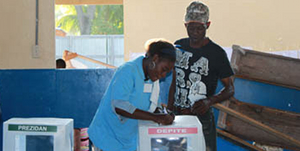 Accused of building their own “palaces” and not speaking “Queen’s English”, women leaders across the Caribbean slowly but surely start to take the reins of power.

Bogota, Jan. 31, 2013 [AlterPresse] --- As women politicians from Haiti to Trinidad and Tobago push hard to break into Caribbean politics, change is beginning to blow through the halls of the established “men’s clubs” that have long dominated the policy circles of these island nations.

“Women [in this region] are still judged by appearance over merit and it’s still too often about how you dress,” Angela Bruce-Raeburn, a political expert from Trinidad and Tobago who’s based in the US, tells Alterpresse. “Women are thought of as smarter if they’re better dressed and unfortunately the media propels these stereotypes along”.

In Bruce-Raeburn’s home country, she explains, “The bar is definitely much, much higher for women politicians like Prime Minister Kamla [Persad-Bissessar]”.

In May 2010, only a few months after the Trinidadian Prime Minister defeated opposition MP Patrick Manning, Manning viciously threw out a series of unexpected questions about the money used to build what he called "Kamla’s palace[Persad-Bissessar’s home] during a session in Parliament ".

“Sadly, these misplaced attacks from the Trinidadian men’s clubs remain commonplace,” says Bruce-Raeburn. “She won’t win again if she lasts until 2015 and it’ll be down to a mix of her Indian heritage and the fact that she’s a woman,” she adds.

At the same time, former Haitian Prime Minister Michelle Pierre Louis, who had a brief stint at the helm in 2008, tells AlterPresse, “The role of women in politics is highly important”. “The whole judicial system discriminates against women and it is their (our) struggle that will bring change and bring more equity in politics,” she adds. “Women cannot stay out if change is to occur for the common good and the benefit of society”.

In 2009, shortly after Pierre Louis left office to return to running her foundation for cultural change in Haiti, Fokal, UN Women kick started a specialized “Fund for Gender Equality” with a range of European countries pumping in over $50 million USD to 94 programmes in 71 countries.

According to UN Women’s media officer in New York, Sharon Grobeisen, the “Fund” exists for women’s economic empowerment and political participation. It awards multi-year grants directly to women’s organizations whose programmes show tangible results to impact the lives of women and girls.

In the past 5 years, the UN has helped support a variety of female politicians into key ministerial positions and currently there are 5 heads of state in 5 Caribbean countries - Antigua and Barbuda, Bermuda, Saint Vincent and the Grenadines, Jamaica and Trinidad and Tobago.

Folade Mutota, a Trinidadian activist and executive director of the Women’s Institute for Alternative Development, laid out some of the main obstacles facing women politicians in the Caribbean for AlterPresse:

• A culture of political campaigning, which facilitates personal attacks, which makes women fearful of slander.

• Women are locked out of the boy’s networks and hence have little access to campaign financing.

These obstacles certainly rang true for Pierre Louis in Haiti as she hesitated to take up a variety of ministerial posts offered to her from the Duvalier years in the 80s through former President Jean-Bertrand Aristide’s postings in the 90s all the way up until the end of ex-President Rene Preval’s first term in 2001.

It was only in 2008 when Preval returned for his second term and after the "hunger riots", when Prime Minister Jacques Edouard Alexis was deposed, that Préval came back to her and said that she should consider seriously becoming his PM that she finally changed her mind.

“I gave it a lot of thought because I always figured that I could be more useful through my work in civil society,” she explains. “I had been rather successful up until then working with grassroots organizations, peasants, women, youth, and my work in the foundation I created in 1995 was getting interesting results”. “But somehow, I also felt that the time had come for me to participate in government and learn from that experience. I finally accepted”.

“My problem was that I realized I had a lot of friends who’d tried before me to get into politics, but their experience hardly made a difference,” says Pierre Louis. “So I was also somewhat skeptical”.

Skepticism almost seems a necessary trait for understanding politics for women in the Caribbean as Bruce-Raeburn details that only last year “In Jamaica, [Prime Minister Portia] Simpson-Miller came back for a second term last year and was attacked for her supposed lack of education and not using ‘proper Queen´s ‘ English,” she explains.

“Men in my home country [like many Jamaicans] still believe that we ‘women’ should stay ‘warm and fuzzy’ and just learn to shut up,” she added.

While recognizing some progress in Trinidad, UN Women supports Bruce-Raeburn’s analysis acknowledging that politics there remains enveloped by a male-dominated environment. To try to change this situation, the UN is pushing to get young women candidates at local levels into the political process and is targeting increased women’s participation in the 2013 local elections.

However, the bar remains high for these young aspiring female politicians across the region.

The key according to Pierre Louis is not to “get into politics on your own”.

“Be part of a political structure that has a program and also has a social base,” she says. “You’ll not be able to change anything alone. Your structure has to be backed by members in Parliament that can make a difference and include elected leaders at all levels. This is the lesson I learned.”

Bruce-Raeburn, who also works as a senior policy advisor for Oxfam America, says that in all walks of life women have to take a stand to break these limitations and stereotypes.

“Just look at what Oxfam’s been doing in Haiti using women mechanics to fix agricultural equipment in the Artibonite Valley to kickstart the rice economy,” she adds.

Pierre Louis also remains positive saying, “The Haitian constitution was amended when I was in government, and that is when I and the women ministers of the time made sure there was to be 30% of women in all the public institutions. It’s in the constitution. That does not mean that it is going to happen rapidly. It is a struggle, but at least there is a definite goal to reach for.”

“I believe there have been a lot of progress in Haiti and in the Caribbean, but there is still so much to be done. We just have to keep the faith and continue our struggle for our rights and that of all citizens”. [rs gp apr 31/01/2013 07:00]