3. Minister-Delegate to the Prime Minister for Human Rights and the Fight Against Extreme Poverty - Marie Carmelle Rose Anne Auguste

4. Minister-Delegate to the Prime Minister in charge of Promoting the Peasantry - Marie Mimose Félix

In Hatit’s most recent presidential elections in 2010-2011, former first lady Mirlande Manigat reached the second round, where she lost to the incumbent President Michel Martelly. She came closest to becoming her country’s first elected female leader.

In 2011, President Martelly proposed subsuming the (2005-created) Ministry of Womens’ Affairs and Womens´ Rights into the Ministry of Social Affairs, but retracted the proposal amid opposition from women’s groups. Nonetheless, the Ministry, which is tasked with formulating and implementing policies intended to improve gender equality, remains a resource-strapped entity.

Also in 2011, the Haitian Parliament approved a constitutional amendment reserving a minimum quota of 30 % for women in all elected and appointed positions at national level. Haitian law provides for equal working conditions regardless of gender, beliefs, or marital status, but does not explicitly prohibit sexual harassment, which is rampant in the workplace.

The Ministry of Womens’ Affairs and Womens´ Rights is leading the drafting of a comprehensive law on violence against women that would address wide gaps in the existing law as well as proposed reforms to the labor code. It would account for workplace discrimination and harassment, but it is unclear when these laws will be introduced to parliament for a vote.

Meanwhile, there is also an ongoing effort to update the penal code to criminalize harassment and increase penalties for rape. Women’s rights groups in Haiti have undertaken massive efforts to document rape and provide services to women victims. Through concerted efforts to push for and train state officers and public servants to respond to rape, law enforcement and the judiciary are increasingly investigating and prosecuting rape and sexual violence in accordance with the law. 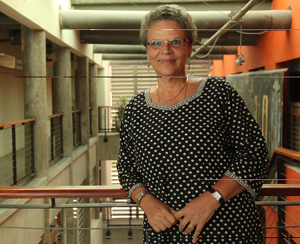 As 2013 kicks off, AlterPresse takes an exclusive look back at the career of former Haitian Prime Minister (2008-2009) Michelle Pierre Louis to better understand the world of Haitian politics for women:

Since Duvalier’s departure in 1986, I have been called to serve as minister or in other institutions. I have always been reserved about that. When Jean-Bertrand Aristide became President in 1991, he had asked me to choose the minister of my interest, instead I chose to work in his private cabinet until the coup. When President Préval was elected the first time, I did not accept either. When he was reelected in 2006, he offered me the Ministry of culture. I did not accept. However, when after the "hunger riots", Prime Minister Jacques Edouard Alexis was deposed, PDT Préval came back to me and said that I was to consider seriously his choice to become his PM. I gave this a lot of thinking because I always thought that I could be more useful in my work in civil society. I had been rather successful so far with working with grassroots organizations, peasants, women, youth, and my work in the foundation [FOKAL – www.fokal.org] I created in 1995 was getting interesting results. But somehow, I also felt that the time had come for me to participate in government and learn from that experience. I accepted finally.

• Did someone or something inspire you to get into politics?

When I finally make my decision, I discussed with several friends who encouraged me to try. My problem was that I realized that I had a lot of friends who had tried before me to get into politics, but their experience hardly made a difference. So I was also somewhat skeptical.

• What advice would you give to a Haitian woman aspiring to enter the Haitian political arena?

Don’t get into politics alone, on your own. Be part of a political structure that has a program and also has a social base. You will not be able to change anything alone. Your structure has to have members in Parliament that can make a difference and elected leaders at all levels. That is the lesson I learned.

Role in Haitian Politics and Move towards future -

• What role have you played (as President of FOKAL) to promote women´s participation in politics?

I cannot say that as President of FOKAL I promote women’s participation in politics. I promote women’s participation as citizen so that they have a voice in what is going on in the country. They can advocate for their rights, and in that manner learn how to get involve at a higher level of governance. The Haitian constitution was amended when I was in government, and that is when I and the women ministers of the time made sure there was to be 30% of women in all the public institutions. It’s in the constitution. That does not mean that it is going to happen rapidly. It is a struggle, but at least there is a definite goal to reach for.

• What is your perspective on the socio-political acceptance of women in political positions of power - do you see this as part of the reason that your term in office as Prime Minister was cut short? Would you consider running for President in 2016?

The role of women in politics is highly important. The whole judicial system of laws, discriminate against women, it is their (our) struggle that will bring change and bring more equity in politics. Women cannot stay out if change is to occur for the common good and the benefit of society. No I will not run for the Presidency because so far I do not belong to any political party. If I were younger that would be my challenge: from the grassroots upwards to build a strong political party with large inclusive constituency that can really influence politics, build a more democratic society, fight for gender equity, education, the environment.

• What are you views on the role of women in politics across the Caribbean region? Do women do things differently in politics than men? If they’re in the top jobs, does government change?

Again, a woman alone cannot think that she can bring the necessary change. There is a need for a paradigm shift along these lines. The issue is to build constituency, to change the laws, to have a judicial system that can apply the just laws and understand the equity issues. I believe there has been a lot of progress in Haiti and in the Caribbean, but there is still so much to be done. We just have to keep the faith and continue our struggle for our rights and that of all citizens. [rs gp apr 28/01/2013 15:00]

Haiti-RD : Statelessness is imposed on Dominicans of Haitian descent

Haiti-Earthquake : For when would we have strong measures to deal with seismic vulnerability?

Haiti - Elections : “How the international community can best help ?”

Trinidad : Attorney General said the country was gripped by fear of kidnapping

Trinidad : Boy who faked own kidnapping to know fate Monday