A Review of Michael Deibert’s Haiti Will Not Perish: A Recent History 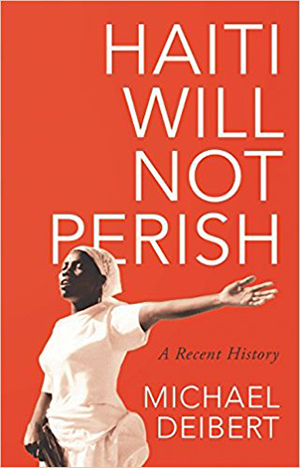 In his latest book, Haiti Will Not Perish: A Recent History, Michael Deibert once again demonstrates his vast knowledge of, and deep affection for, Haiti, with which he has had a twenty-year connection.

His absorbing, often mesmerizing, story traces the history of, and events in, Haiti from the independence war of Toussaint, Dessalines, Christophe, Boukman and others to the death in March 2017 of René Préval. His canvas is vast and multi-colored: health (including the cholera introduced by UN troops); relations with the Dominican Republic; the international community, especially the UN through MINUSTAH; CARICOM; US influence over the decades; elections (always flawed); corruption (always present); portraits of individuals such as Aristide, Jean-Claude Duvalier and Préval; the skin color divide; and so on. His account of the aftermath of the massive January 2010 earthquake is the best I have ever read, and his very first chapter, Istwa (History), covering the period from the 1840s to the forced departure of Aristide in February 2004, is itself a little masterpiece.

The quality of Deibert’s research is extraordinary. I could not help wondering how, as a white man, he was able to acquire such a range of black Haitian contacts. A black man myself, I remember my astonishment, while visiting a school in Port-au-Prince, at being called blan (white) by a small pupil even before I had opened my mouth. He was of course reacting not to the color of my skin – ironically, I was blacker than he – but to what he perceived as my overall “foreign” appearance, which meant white.

First, the approach of the UN to Haiti (and, I suspect, to other similar situations). While I was Kofi Annan’s Special Adviser on Haiti in 2004, I repeatedly, and without notable success, sought to have a clear distinction drawn between peacekeeping and peacebuilding. In my final report, I told Annan that I was “firmly of the view that the concept of MINUSTAH as it now exists is unsound, and largely irrelevant to the people of Haiti, whose welfare has to be of paramount importance. The civilian side of MINUSTAH must…overwhelmingly comprise developmental aspects chosen after close consultation with the Haitian government and others in Haiti…” Deibert’s book suggests that nothing much has changed in the years since.

Closely allied in the minds of UN bureaucrats with their emphasis on peacekeeping is what they refer to – Deibert mentions it – as the organization’s “exit strategy”. I found it alarming, not to say counter-productive, that such a strategy would be formulated even before the UN – in Haiti’s case, MINUSTAH – actually entered the country concerned. One can appreciate the desire (quite apart from the costs involved) not to overstay one’s welcome and thus project the impression of an occupying force. But how would the country’s fundamental problems be seriously addressed if one were already planning how to leave before one had even arrived?

Second, Gérard Latortue, the Interim Prime Minister after Aristide left, was, as I once wrote, mauled during his tenure “as the illegitimate rag doll of the Bush administration”. It was an unfair assessment of the man, and the Livre Blanc (White Paper) published by his transition government, covering the period March 2004 to June 2006, records the not inconsiderable advances made by him and his team.

Third, Haitians as a whole. Deibert frequently refers to, and expresses his bemusement at, the willingness of Haitians not so much to work with one another as to enter into constant confrontation, to the detriment of the country. “The real question in Haiti,” he quotes Louis-Henri Mars as saying, “is an issue of relationships, of ‘are we in this together or are we separate tribes?’”

Why is institutional reform such a will-o’-the-wisp? Why is the everyday corruption so difficult to tackle? Why, despite all that is preached against it, is impunity so pervasive, so natural?

Why would Michèle Pierre-Louis sadly ask, “Is it that everything that works has to be killed?” And Deibert recalls that in January 2012 Michel Martelly told Parliament that Haiti then was “the sum of internal strife, assassinations, kidnappings, embargo, anarchy, chaos, environmental destruction, selfishness and greed. This must change.” Has it changed? If not, why? What is the point of always referring to a magnificent past if the present, like Yeats’ center, is not holding?

Michael Deibert has written a remarkable book. It is detailed, thoughtful, sensitive, and in language that never stops to wonder where it might be heading. It is to my mind indispensable reading for anyone, Haitian and non-Haitian alike, wanting to understand, or supplement his or her knowledge of, the currents of Haitian politics and history in general, and of the last fifteen years in particular.

The book takes its title from a promise by Préval in February 2010 at the Université Notre-Dame in Port-au-Prince. “Haïti ne périra pas,” he said that day, one month exactly after the earthquake. “Haiti will not perish.”

It will not perish. But when will its people harness productively their considerable intelligence and abilities in the national interest? When will Haiti flourish?

* Reginald Dumas served as Trinidad and Tobago’s Ambassador to Washington and Permanent Representative to the Organisation of American States and as UN Secretary General Kofi Annan’s Special Adviser on Haiti.