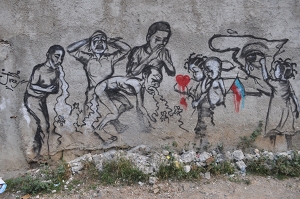 Bogota, 30 oct. 2012 [AlterPresse] --- Human trafficking and migrant smuggling to and from Haiti is a family affair worth millions of dollars with the endearing ´old lady´ running field operations from Chile, the ´sister´ managing accounts in Cuba and the ´bishop´ playing the religious card from Ecuador.”

“Since Haiti’s 2010 earthquake, an extensive network has developed in Haiti with traffickers offering scholarships at universities and job opportunities to social groupings in the west, center and northeast of the country,” Wooldy Edson Louidor, the Latin American and Caribbean Regional Coordinator for the Jesuit Refugee Service told AlterPresse.

Big money and promises of ‘paradise’

As the sixth session of the Conference of State Parties to the UN Convention against Transnational Organized Crime (UNTOC) drew to a close in Vienna last week, Alterpresse took a closer look at the effects of the $32-billion-dollars-a-year illicit human trafficking and smuggling markets for Haitians in South America.

Michela Macchaivello, a migration expert from the International Organisation for Migration (IOM) in Haiti, told AlterPresse, “Haiti is considered a country of origin, transit and destination for Victims of Trafficking (VoT’s), who are moved back and forth by both national and international human smuggling networks”. “The estimated number of internally trafficked victims is between 200,000-300,000 while international trafficking numbers are in the low thousands”.

“Smugglers are now charging up to $5000 USD per person for (false promises of) work or education packages,” details Louidor. “Over 3,000 Haitians were sold in South America in 2011,” he says, inferring a business worth up to $15 million USD.

During the last two years, “over 15,000 Haitians have migrated to Latin America with 6,000 arriving in Brasil, 2,000 to both Ecuador and Chile respectively and over 1,000 to Mexico,” he adds. “Many Haitians now prefer to go to countries in South America like Brazil and Ecuador instead of risking their lives by sea travel to the perilous US coastline off Miami,” says Louidor. “The cost for both trips is similar, between $3,500 and $5,000 USD, and by going south they swap the heavily patrolled US waters for the porous southern borders”.

In July 2008, Ecuador opened its doors to foreign migrants and asylum seekers dropping all visa requirements and opening the floodgates to thousands of Haitians who swept into Ecuador and over the border into Colombia. The UNHCR’s chief protection officer in Bogota, Holly Berman says that there was a 3-fold increase in asylum seekers in Colombia in 2009 following Ecuador’s 2008 decision.

In Colombia, one of the key transit countries in South America, there is only one officially recognized Haitian refugee. According to Louidor, this is likely due to the heavily repressive actions of the DAS (former Colombian migration and intelligence service that was disbanded due to illegal wiretapping activities), who arrested and deported 22 Haitians back across the border into Ecuador in 2009 shortly before the earthquake.

In an interview with AlterPresse, Adriana Blanco, the national coordinator for the Quito office of the US-based NGO Asylum Access, says “The majority of Haitians who enter Ecuador are young adults between 18 and 23 years-old many of whom are victims of human trafficking networks that smuggle them into the country”. “They are desperate because of the slow reconstruction process in Haiti, which has left them without access to jobs, health services and education”.

In 2011, an Inter Press Service (IPS) report detailed how four young Haitians told legal authorities in Ecuador that they were offered complete scholarships to the university, but that once they reached the country they were locked up in a house and made to pay $150 USD a month for rent and board, while given the run around about the promised education.

At the same time, the Ecuadorian government has only granted full refugee status to 25 Haitian citizens and following the earthquake ‘regularised 392 Haitians’. Blanco told Alterpresse that those Haitians who do manage to maneuver their way into the state system often fall between the squalid conditions of a detention center, locally known as ‘Hotel Hernan’, an old run-down guesthouse in Quito or battling language barriers on poorly paid construction sites on the fringes of the capital. Regroup and try again in Chile

While Ecuador reinstated tougher visa requirements for forced migrants in late 2010, Chile kept an open-door policy and in recent months has become an ever-increasing entry and transit point for Haitian migrants.

In an exclusive investigative report published earlier this month by CiperChile, a Chilean investigative journalism foundation, reporter Guillermo Villarubia reveals the complex web behind an elaborate human trafficking ring orchestrated by a Dominican national and two Haitians to smuggle 17 Haitian migrants into Chile.

In an interview with AlterPresse, Villarubia explains how most of the 17 Haitians who were brought in to Chile by this criminal operation are now working and receiving assistance from the Chilean government to legalise their status in Chile.

However, according to Villarubia the government doesn’t have a clear policy on how to deal with Haitian migrants or asylum-seekers. “Many of those who arrive at the international airport in Santiago have been deported and so others try coming across the Peruvian and Argentinean land borders”.

Louidor says that things started to change for the worse in late 2010 as “Haitians arriving at the airports in both Santiago and Quito were interrogated and asked to show proof of having over $3,000 USD in their bank accounts”.

Adapting to this shutdown, many of these forced migrants re-mount back onto a new helter skelter ride by bus from Port-au-Prince to Santo Domingo, a costly plane journey to Lima, 5 to 6 hours trekking across the interior plains of Peru, back on a banged-up bus to Iquitos and finally a perilous boat crossing through the Amazonian border town of Santa Rosa to Tabatinga in Brazil. And all the while their “tourist guides” are more often than not fellow Haitians who act as coyotes managing the trip’s logistics in return for thousands of US dollars.

“The immense and porous South American borders are the perfect playground for these criminal networks who exploit Haitian (and other) forced migrants for cheap labour selling them off to the illegal wood and mineral industries in the Amazonian forests,” says Louidor.

According to a report published by The Guardian newspaper in February this year, it was in just these border states of Acre and Amazonia that the Brazilian government aimed to give $520,000 USD to support a fast-track visa programme to get be able to work legally over a 5-year period.

However, six months later, [210 Haitians ended up stranded in the Amazonian town of Brasileia in Acre- http://reliefweb.int/report/brazil/latin-america-haitian-migrants-threatened-repatriation-across-continent], and contrary to their previous position, the Brazilian government has yet to decide whether or not to regularise their legal status or to expel them back to Haiti or into Peru.

"Government policy is to fight organised crime which uses migrants to its advantage", said the minister for foreign affairs in Brazil, Antonio Patriota, who stressed it was unlikely the government would grant more Haitians residency for humanitarian reasons.

Contrary to this position, Blanco argues that given the high rates of trafficking across the continent, regional groups like the UNASUR should set up “a regional network to fight the trafficking of Haitians, making a distinction between perpetrators and victims, and punishing the perpetrators while protecting the victims.”

While several countries like Ecuador, Brazil and Colombia did initially provide “humanitarian visas”, several of these states have either flip-flopped on their positions or have left Haitian forced migrants in legal limbo as they step in and then out of the revolving doors of South America´s haphazard immigration systems.

Blanco adds that “a more coordinated regional approach could also help to prevent forced migrants from "asylum shopping," or looking for the best terms or easiest points of access across the Americas. “This could also help to close the gaps on human trafficking and smuggling”.

Closing these gaps also requires closer attention to the porous border problem from the Caribbean to the Amazon. Since 2007, the IOM has been working with the Haitian authorities to improve the management of its land, air and sea borders, especially those with the Dominican Republic. Currently this program, which ended in 2011, is looking for new funding.

With this in mind, in September this year, the UNODC began an awareness campaign, which aims to draw attention to the various aspects of transnational organized crime, detailing the key financial and social costs behind organized crime, including those concerning the smuggling of [forced] migrants.

“In South America, over the past 12 months we have seen tremendous differences between proposed laws and effective practices on the ground,” said Blanco. “But it is much more than a legal debate. Lives are at stake. People in need of international protection should see their claim for protection dealt with in a predictable and transparent way”.